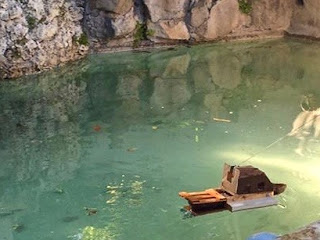 Via Damaso Cerquetti, April 26, 2017—
Via Damaso Cerquetti, Rome, April 25, 2017— PROPRIETY AND THE APPROPRIATE pace of intended decay-repair-replacement-and-ultimate-concession of Self, too. I arrived here three weeks ago, weak and unwell and out of sorts, intending to contemplate my feelings about religion: past and permanence, decay and defiance, self and society, faith and belief, fact and facticity, life and death.

The other day, strolling through the Pamphilj garden, we stopped to watch a grandfather (one assumes) winding up the screw on a home-made boat he’d made (one further assumes) for his little grandson. The boat was cobbled together out of scraps of wood: a slab whittled to a point at the bow, some kind of lattice-work set on the stern, a couple of blocks for the cabin. The screw was four oversize blades snipped out of an olive-oil can, I imagine; it was driven by a rubber band, the other end hooked over a bent nail under the bow.

The little boy stood by patiently while the old man slowly and methodically wound the blades. When the rubber band was tightly wound, holding the blades lest they turn too soon, he put the boat in the pool of the fountain. Was it the Fountain of Venus? I think so. The boat powered away a meter or so, then drifted to a stop; the little boy pulled it to him with a string that had been attached with forethought to the prow. The entire performance was carried on in silent concentration. Perhaps this was the boat’s maiden voyage. Neither of the actors showed any emotion at the proceedings. I might have been disappointed, as either grandfather or little boy, with the apparent failure — the word’s too strong — of the voyage. They seemed completely untroubled. The boat seemed to be a third actor, with power and flaws of its own. I think in its pathos, in its ingenuity and enterprise, and in its care for symbolic representation of the parts of a real ship — a tugboat, say — the little boat was a work of art.

Grandfather knew this, and little boy knew this. The boat was a transaction between them; its performance a loving dance of entropy warning both, no doubt without their conscious awareness, of the running down of things, but also the optimism of the making of things. And then simply physically, and to the eye, the little boat made me think, as so much does, of the painters Gordon Cook and Philip Guston, whose view of — or, some would say, interpretations of — external reality are so individual, so clearly charged with deeply known meaning which can only be represented, realistically, as unknowable by anyone else. The things other people make, whether physical objects like toy boats or paintings or fugitive things like songs and dances, if they have any significance at all, are full of meaning to the people who make them, aware of it or not, but rarely the same meaning to us, even if we think we know much of the history or tradition behind them. So a toy boat in its pathos and its physicality brings me closer, in contemplation, to a Mozart piano concerto.

What does grandfather know? What does he believe, in what does he have faith? To what extent does he want this little boy to share any of this? I ask this because, after all, I’ve been here with fourteen-year-old, hardly a little boy, a boy wide-eyed and fiercely observant most of the time on this first trip to Europe, a boy still to young to appreciate the stronf flavors of anchovies (think of the sea, his ten-year-older cousin wisely says), a boy caught, unknowingly I think, in the sadness of the farewell to childhood.

I stroll and catch the random observation and dwell on it at absurd length and, if I’m not too lazy, write about it at even more ridiculous length, in order to find out what I know, what I believe, whether I have any faith. On the way to this of course I sometimes talk; each day seems to have its focus.

Yesterday, for example, it was units of measurement, begun with a discussion about the metric system, the paucity of hecto- given the frequency of centi-, the way the French determined the length of the meter with their straight line from Normandy, I think it was, to Barcelona; and from there to the unit of measurement of dogs (a wire-haired terrier equals six, possibly eight chihuahuas), of trams and buses, of waits for trams and buses.

Always, apparently, contemplations of turbulence: You’re obsessed with Tahiti and turbulence, he observes, though I’m not aware of having spoken more than once, and that just now, about Polynesia. The toy boat brought Turbulence to mind, of course, but not Tahiti; so he must be wrong about obsession. Yet this observation of his, to him, is an observation of fact, whereas I think of it only as a mistaken impression. The mistaken impression of a grandfather’s interests is less eventful than the erroneous interpretation of the course of history. I’ve taken some care not to discuss, with him, the perhaps deliberate and certainly tireless attribution, by Christians, of their willful destruction by the early Roman empire, and I’ve certainly not gone into the symbology of those innocent lambs in church facades and frescos. (This must already have been the fruit of urbanization: no one involved in the actual husbandry of sheep would think of them as symbols of innocence and purity.)

The facts of Rome are the ruins of its past, the turbulence of what Gertrude Stein would call its continuous present, the uncertainty of its future. These are facts to me and I believe I know them. I infer from their evidence motivation and futility on the part of Roman actors: emperors and popes, gardeners and stonecutters, poets and architects. I believe I’m often right about that, too, though I can’t give you any tangible proof. I think, and some will find this sad, which I’ll dismiss as sentimentality, that I lack faith. Faith seems to me to be allegiance to a concept denied by every present evidence. I think it wrong to insist on it, and certainly wrong to insist on others accepting ours, if we have any.

I believe in Beauty, generosity and gratitude, and the ineffable love of family, and I’m grateful to our nature that those beliefs seem to be built in to the human sensibility. I don’t see any reason to strive for more, or to listen to anyone arguing a moral position that requires more.

Posted by Charles Shere at 4:49 AM

I love this post - laughed out loud! Short observation - the younger ones often hear what we aren't saying and know much more about what we are screening than we would like to think. We aren't their only influence, you know.

Just for clarity, it was the paragraph about metrics/measurement that caused my laughter - and then followed by Tahiti and turbulence...these are wonderful moments, it seems to me.

Thank you. You remember better than I the acuity of the 14-year-old mail brain, which I find often vague and formless. But it's these moments that so hugely enlarge the scope and scale of the world we live in…