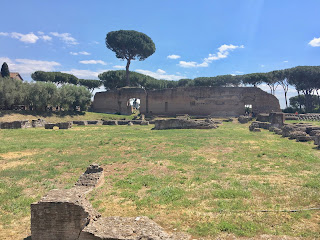 Via Damaso Cerquetti, April 20, 2017——
I AM HAPPY to report that the Colosseum is much changed. Well, not the building itself, of course, though every time I see it I think more brickwork and reinforcing new concrete has been added. Nor do I recall those huge blocks of white stone stacked up on what you might call its rim, on the north side, which look as if they’d be easily dislodged in a serious earthquake.

What’s changed, beyond the thorough cleaning it’s been given — it gleams as white as Cestius’s Pyramid now, as white as, well, a toilet — what’s changed is the whole experience of visiting it. I guess I was last there ten years or so ago. In those days, as I recall, you wandered around in the Forum and the Colosseum freely, without paying; you shared the Forum with a few other tourists and some archaeology and history buffs, but it wasn’t terribly crowded. But of course that was in November, I think, or maybe January.

Now it’s all being marketed, and successfully, and I must say rather well. Although there are a few people offering you tours, the phony gladiators who used to strut around waiting to be photographed with your kids or wife in funny poses are all gone. A couple of military vehicles are parked on the road leading downhill from the Piazza del Colosseo, and you are screened (and so are your bags, and the contents of your pockets) on entering, there’s not a lot of obvious security presence.

But there are nice new bookstores, and an elevator, and fairly extensive panels in Italian and English describing this thing and that. I had the feeling the place is less romantic, less a ruin even, and more an archaeological and historical artifact. We were there early in the day, a little bast opening time (8:30), and had bought tickets online: I showed the e-mailed receipt on my iPhone, and we were whisked through security scan and on our way.

It was biting cold. Windy, too. The wind’s been blowing down from the Alps these last couple of days, bringing dust and headaches. We toughed it out, though, strolling the available levels, never making a complete circuit, stopping in a bookstore to warm ourselves up.

At one point on the second level, I think, there’s a fine installation of “Images of the Colosseum” — perhaps a changing exhibit, I don’t know, certainly one well worth seeing, even studying. There are early depictions on coins, architectural analyses from the Renaissance, romantic paintings and drawings from the 18th and 19th centuries, even 20th-century drawings and photographs offering revisions of the building. One envisions a huge cubical hotel rising from within the Colosseum — a project not likely to be achieved, but who knows, these days.

There is an amazing three-dimensional model of the Colosseum, scaled at 1:60, made of wood, bone, and lead, several hundred years ago, made not ass it was now, or at the time the model was made, but as it must have been when it was new in 833 — excuse me: that’s the Roman calendar: 80 CE we call it. (Now: I’m still more familiar with 80 A.D.) The detail on this scale model is unbelievable; it makes one ache to see a full restoration of the building.

That would be impossible, of course. Virtually all the travertine and marble once sheathing the building are long gone, stripped not only for the stone but also for the bronze fittings that held the veneer to the (let’s face it) rather crude Roman concrete and tufa blocks making up the thing. The Colosseum is made of concrete and sand, I read somewhere: brick and rubble, too. It took nearly ten years to build, and much of the material must have come from Nero’s vast palace which had overlooked the lake he’d had built on the site, formerly an unhealthy swampy area infested, he must have felt, with the wretched hovels and shops of commoners.

Leafing through the Internet I happened on a fascinating description of the behind-the-scenes operations of the Colosseum in Smithsonian Magazine , and looking down into the exposed sub-floor archaeological digs it was fairly easy to imagine the operation of elevators, cages, and ramps necessary to the elaborate productions for which this monumental thing was built. It’s often been said the purpose was civic (therefore national) pride, reinforcement of militaristic and stoic values, celebration of the new lands continually being brought under Roman subjugation. Wild animals were brought from North Africa, Dacia, and elsewhere.

Criminals were made to fight one another to the death, as is well known, but there were lapses in the general cruelty. One emperor, having caught a jeweler passing off inferior stuff to his wife, sentenced him to one of these hunts: but when the caged animal was released in front of the quivering cheat, instead of a lion or leopard he was confronted with an angry chicken. The crowds laughed; the emperor let the poor fellow off, with a warning.

We spent a couple of hours in the Colosseum, then strolled over to the Forum. Surprise: the line at the entrance was a good fifty yards long and not moving at all. I remembered another entrance, down the Via di San Gregorio, that leads up into the Palatine hill, and there was no line at all. We spent another couple of hours there, strolling, looking down on the Colosseum and the Forum, now quite full of tourists with their guidebooks and acoustical guides and even, I think, iPhone apps explaining things.

We were content to read the many panels, always in both Italian and English, and to stumble on the Farnese gardens, the roses coming into full bloom and scenting the air, and to sit on benches in the sun and ouot of the biting wind. It’s a melancholy business, of course, wandering among these testaments to impermanence, but the resurgence of weeds, and the beauty of gardens and pines, helps to put everything in perspective.

On the way down the Via de San Gregorio toward the Circus Maximus — and in truth toward a refreshing spritz at a sidewalk table — fourteen-year-old was accosted by a con man from Africa. I’m black, you’re white, he said, here’s a gift, and gave him some sort of bracelet. I was a little ahead of them and didn’t realize what was going on for a minute. He turned out to want ten euros for it, of course. I told the boy to leave it on a handy wall, knowing the guy was watching. Oh, you don’t want it, he said, Not good. We walked on, ignoring him. I hope he’s sentenced to a chicken.

Oh, Simon had that bracelet number happen to him in Paris--when he was 14! It was kind of unpleasant--he followed us and yelled at us--and if I recall correctly, soon after a bird flew over and dropped its droppings on me.

I suspect we had ice cream after though, and good feeling were restored!