Rome 3: Things as they are 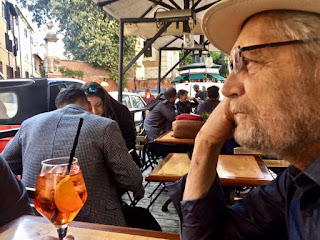 THE REDBUDS AND CHERRY TREES are in bloom; the sycamores in full but early foliage, that pale green so full of optimism and freshness. The weather has been calm and sunny for the most part, the occasional thunderstorm lasting only a few minutes, and that in the evening when we have been at home. And yet…

I think too often and continuously of Horace:

Diffugere nives, redeunt iam gramina campis
arboribusque comae
(All the snow vanished now, and the grasses back in the meadow
foliage caps every tree)

And then, fourteen-year-old asks me if I believe in God, and I ask in what sense, and he says well not old-man-with-a-beard type God, but some single principle that is behind and governing everything, maybe a waveform or something like that. Interesting. As I think I've written before, I went to a religious college for my first year, and History of Religion was a required course that freshman semester. According to our textbook, religion is "the serious and social attitude toward that which controls one's destiny." I quote from memory; I don't recall the author; the italics are certainly mine.

I accepted that definition for a long time (I had no choice at first); it seemed generously broad and could be bent to cover many cultures. I don't recall what the author thought of the concept of God, or gods; clearly it or he or they would be the controllers of destiny.

I may have written before about a Filipino physicist I met twenty years ago in Provence, who said everything could be explained by turbulence. He was annoyed that he hadn't been awarded the Nobel prize for his theory, which he'd published here and there in the (I suppose) correct quarterlies. I'm not sure I understood his concept, though he explained it clearly and at length. All examples of turbulence are essentially similar, whether in air, water, or even light. I asked about social turbulence: Yes, that too. It's the one principle governing all motion.

So you have inventors of explanations of where it all came from. You have moralists telling you how you should deal with it. You have visionaries telling you where it's all going. Over time it all gets institrutionalized, or it doesn't; someone (or a committee) writes things down; time goes by and commentaries and translators have their way with it.

Wars are fought, believe it or not, over these fancies; sometimes the wars last for centuries and ultimately bring down civilizations. There are ancillary motives: profit, of course, or slaves, or land, or gold. But it seems very often the means of engaging the populace, who are needed after all to do the actual killing and dying, is to appeal to their religion, their "set of values," the thing they think — isn't it obvious? — controls their destiny.

THE OTHER DAY we took the tram 8 down to Trastevere for a gelato and so on. Another unpleasant incident: waiting for the tram, I noticed a guy who looked a little shady, whose glance shifted from one waiting passenger to another, who slumped against the guard-fence, who was dressed badly with many pockets. As discreetly as possible I moved away from him, thinking him a possible pickpocket, not that some pickpockets don't dress well and hold themselves nicely.

A young couple eyed him just as morosely, and when we all got on the tram the young man confronted him: I don't like the way you look. This was said quietly but firmly: I heard it, the guy's girl friend certainly heard it (she looked at him appreciatively), the shady guy heard it. I don't like yours, either, he said, and then something else I couldn't understand.

Then he did something remarkable: he approached the young man very close, almost nose to nose, and drew back his upper lip, baring his teeth. Oh-oh, I thought, knives will be out at this rate. But then he turned and moved further down into the tram, leaving the young couple to bask in one another's virtue.

I suppose it is true of any city, but to me Rome especially is a theater, there's a performance going on all the time. I'm in a perpetual present when I'm here. At the Piazza Santa Maria in Trastevere there's often some kind of performance going on: this time it was a mime. He pulled a ten-year-old boy from the crowd and taught him to mimic a bull, index fingers raised alongside his temples to suggest horns. He had him rush a red cape he produced magically from somewhere.

The mime was an adroit toreador: three times he evaded the charge. The fourth time he held his red cape in front of a heavy cast-iron bollard: the boy charged, but the mime caught him up before the fatal collision. The audience loved it. Less successful, I thought: an attractive young woman was invited from the crowd and made to mimic the mime: extend arms, return them, lift them, drop them, and so on. She did all this perfectly. Then in the course of these calisthenics he introduced a new element, pulling up his shirt to reveal his nipples. She declined, of course, to general applause. We moved on.

Trastevere is crowded as usual but I like it; there are many languages and purposes and it's pleasant to sit in a café with a spritzer and contemplate it all. The Sunday "flea market" at Porta Portese is now mostly a succession of cheap underwear, shirts, shoes, belts, kitchen tools, DVDs, electronic accessories and the like; antiques — furniture, jewelry, clocks, old model railroads, strange old amateur paintings — are relegated to just a few spots on the periphery. Commercial junk has won this battle.

Globalism, Hamza says, meaning to explain the phenomenon, I think, but in fact describing it as it is. But it's a loop: China sends the junk, some invisible power distributes it, these vendors do their best to sell it, people grow to depend on it. Hamza bought a shirt. Fourteen-year-old bought a hat. Both seem like good purchases, the items worth the amount asked and given. Cash is what lubricates the daily transactions; stuff is what keeps the invisible powers busy between more dramatic events. I kept my hands on my phone and my wallet and there was no turbulence.

I CONTINUE TO FOLLOW, to the extent that I think about it at all, Epicurus. I do believe it was a big mistake for Rome finally to establish Christianity, fighting to require the few pagans left on the periphery of the Holy Roman Empire to convert, and preparing the way for the middle East and North Africa to establish Islam. Religion being a social attitude is one thing; using it as a governing principle, let alone forcing it on others, is quite another.

Epicurus warned about these matters:

For truly there are gods, and belief in them is obvious. But they are not such as the crowd thinks, because most people do not keep steadfastly in mind the qualities attributable to gods. The truly impious person is not the one who rejects the gods worshipped by the crowd, but the one who thinks of the gods in the way the crowd does.

For the things most people say about the gods are not faithful to the attributes of gods. Instead, they are false presumptions, according to which the greatest evils happen to the wicked and the greatest blessings happen to the good—all from the hands of the gods who, naturally, are assumed to always favor what the crowd believes are their own good qualities, taking delight in people like themselves and rejecting as damned whoever is not of their kind.

I often wish Julian the Aspostate had not led troops into Iraq, there to die in a useless war; I wish he'd stayed home and worked to extend the concepts Hadrian had in mind; I wish things had worked out differently. I suppose my religion is Romantic Hellenism; I'm interested in examining things as they are and perhaps discovering principles behind the immediate evidence and avoiding pain and respecting others.

Epicurus, and Stein, and common sense:

Posted by Charles Shere at 1:41 AM